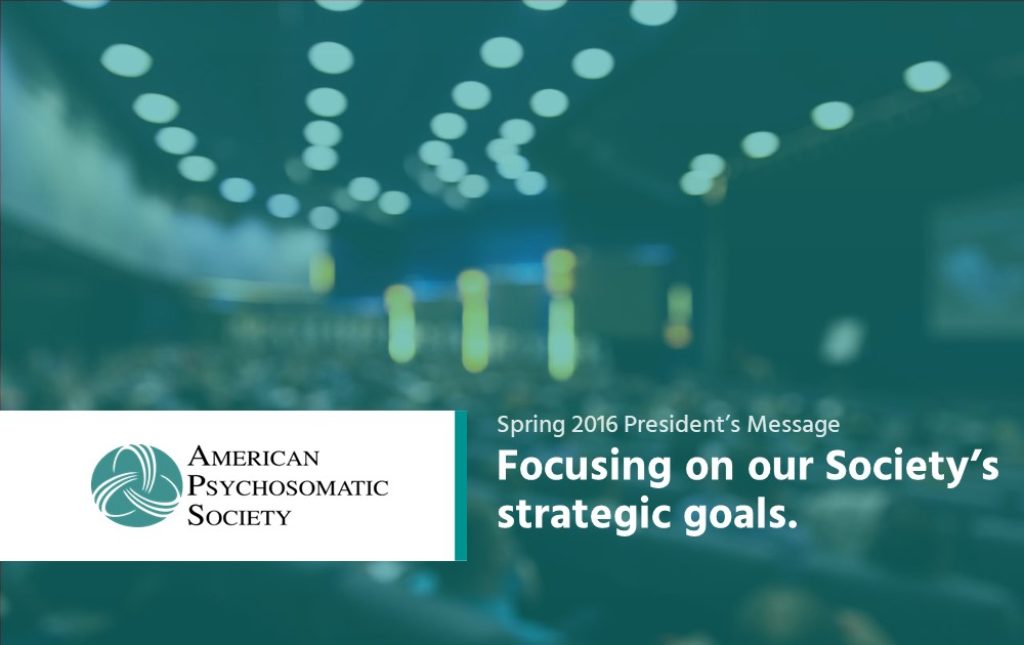 It is now twenty years ago that I first attended an APS Annual Meeting and I haven’t missed a single meeting since then. So Denver was my very personal 20th anniversary. Like many of you I see APS as my scientific home, and this for very good reasons. As the premier scientific society integrating mind, brain, body and social context in medicine since 1942, APS has enriched my academic life over two decades. Like in all previous years I returned quite inspired from this year’s meeting in Denver. Yes, I feel proud and honored to have the privilege of serving as your President over the next year and I want to extend my wholehearted thanks in particular to our Past Presidents Karen Weihs MD and Mustafa al’Absi PhD for handing over our Society in very good shape. However, it is mainly the meetings themselves that have inspired me this year and all the years before. Going to APS always feels like coming to see old friends and making new friends who help me continue and improve my scientific and clinical work.

One of our APS goals is Scientific Excellence and this goal was once more reflected in the meeting program that Lorenzo Cohen PhD and the Program Committee put together. It was really hard to pick from numerous great presentations. However, I want to highlight two examples of why I love attending APS:

Kevin Tracey’s talk about “Bioelectronic Medicine” was a fantastic example of scientific excellence, offering a potential new paradigm for treating inflammatory diseases and probably even inflammation occurring in the context of multiple other diseases. This approach may complement or to some degree even replace molecular treatments in the future. The idea that each neuron is unique and that targeted stimulation of a small number of rather specific (eg, vagal) neurons may serve very specific therapeutic targets sounds compelling. It offers a substantial progress over relatively crude and simplistic concepts of global sympathetic or vagal “tone”. Possibly, electrical stimulation of small groups of autonomic nerve fibers may in the future help in treating a variety of diseases, thereby improving health without the high costs and sometimes severe side effects of modern biological drugs. This sounds exciting. However, I was even more excited by the discussion of the talk, which I found so typical of APS. A discussant raised the question whether it necessarily needed to be electrical stimulation or if it might be possible to develop psychosocial interventions (such as imagination techniques or meditation) that lead to stimulation of those autonomic fibers via the brain itself. Dr. Tracey responded this would be a testable hypothesis. Although I think testing it will be quite a challenge, I feel confident that such hypotheses will be tested in the not too far future and that APS members will play a key role in this endeavor.

Turning to our second strategic goal to increase Clinical Relevance of our research I was particularly impressed by Dean Ornish’s talk about the “Transformative Power of Lifestyle Medicine”. As at my very first APS meeting in Williamsburg VA and so often since I once more had the opportunity to meet in person the outstanding colleagues whose work I had always admired from the literature. Although I wouldn’t agree with all conclusions Dr. Ornish drew from the empirical data he presented, I learned a lot from his success in implementing his lifestyle program. This is putting our research into practice. A lot of this success obviously has to do with the power of harnessing positive affect for facilitating lifestyle change in individual patients and for marketing psychosocial interventions to politicians and health care payers.

After returning from Denver I had to give an introductory lecture for my medical students who – as everywhere in Germany – all have to go through mandatory courses in Psychosomatic Medicine and I found that most of the really innovative content I was presenting came from APS meetings. So APS also helps me in improving student teaching and thereby in educating future physicians, which will also increase our clinical impact.

Our third strategic goal is to have a Vibrant and Diverse Membership and this was definitely what I found in Denver. APS has launched a variety of successful initiatives to support diversity among our members. One specific focus is on our young members who are the future of the Society. I am happy to report that the Denver meeting was the first one to have more trainee participants than non-trainees. This year’s Young Investigator’s Colloquium organized by Oliver Cameron MD PhD and others was again overbooked and very well received. The Emerging Leaders Initiative has done a great job in activating young members of our society to get prepared for future leadership. As an additional initiative for fostering young members’ scientific impact and careers, a Meet the Editor workshop is currently being planned for the 2017 Annual Meeting. Council member Mary-Frances O’Connor PhD has launched an international Lab to Lab Exchange Initiative to broaden research and training in psychosomatic medicine, taking advantage of the strong existing international connections in APS. The initiative aims at supporting trainees (graduate students, medical students, post-docs, etc.) going to and from the US and Europe by identifying possible sources of funding. Both potential mentors and mentees are also invited to join an information network of existing and planned exchange projects.

During the strategic planning process we have been thinking about projects to support our strategic goals in the near future and several great ideas arose from that discussion.

I am happy to announce some of these exciting new initiatives. Some of them will cluster around APS’s 75th anniversary which we will celebrate over one whole year, starting at the 75th Annual Meeting on March 15-17, 2017 in Sevilla (“Seville”), Spain, extending over the special topic meeting to be held in the fall of 2017 and ending with the 2018 Annual Meeting. A task force of APS leaders and representatives of senior and young members at large has been created to coordinate all anniversary-related programming and additional activities. The group will be happy to receive your suggestions for any aspects of the jubilee celebration.

When APS was founded in 1942, its identity was to a large degree defined by Helen Flanders Dunbar’s book “Emotions and Bodily Changes”. Also today, one of APS’ core competencies is on linking affective processes to health and disease. Council therefore launched an initiative on Affect Science in Medicine to revisit the relevance and mechanisms of emotional processes in health and disease. As part of this overarching initiative, we are liaising with the European Association of Psychosomatic Medicine (EAPM) to conduct a joint preconference workshop on Affect and Somatization at the 2017 Annual Meeting. The 2017 (mid-year) special topic meeting will focus on “Emotions in Social Relationships: Implications for Health and Disease. We are in negotiations with other societies active in this area who might be interested in co-sponsoring this event. In celebration of APS’s 75th anniversary we will announce an APS anniversary award related to the theme of the 2017 special topic meeting. Our idea is to increase our visibility by this award and to give up to three (possibly mid-career) researchers an opportunity to present their best research at that meeting, together with outstanding senior researchers in the field who will be invited by the steering committee chaired by Richard Lane MD PhD. Keep your eyes open for the call for nominations which will come out within the next weeks! From the special topic meeting we expect a series of potential high-impact publications for our Journal Psychosomatic Medicine.

But why wait for 2017? This current year also offers another top-quality scientific APS event. A number of outstanding researchers have agreed to speak at this year’s special topic meeting on “Neuroscience of Pain: Early Life Adversity, Mechanisms and Treatment”. This one-day event will be held on October 15, 2016 in the New York Marriott Downtown Hotel in New York, NY. For the first time we now offer the opportunity to submit abstracts for poster presentations related to the theme of a special topic meeting to complement the invited lectures. We expect the posters to enrich the scientific content of the meeting and to help presenters getting their travel costs covered by their institutions. We see this as an experiment and are interested in learning your response. Abstract submissions and registrations for the meeting are now open. Since space is limited and we are partnering with the International Association for the Study of Pain (IASP) in advertising the event, please be sure to register early in order to secure your admission. Registrations are accepted on a first come first served basis.

There are a couple of other important activities going on. Here I don’t have the space to mention all of them but I am extremely grateful for seeing so many APS members, officers and our national office dedicating their time and effort to keeping the “elderly lady” APS vital and thriving. So I am sure APS will still dance next year at her 75th birthday and you are all invited to join us.