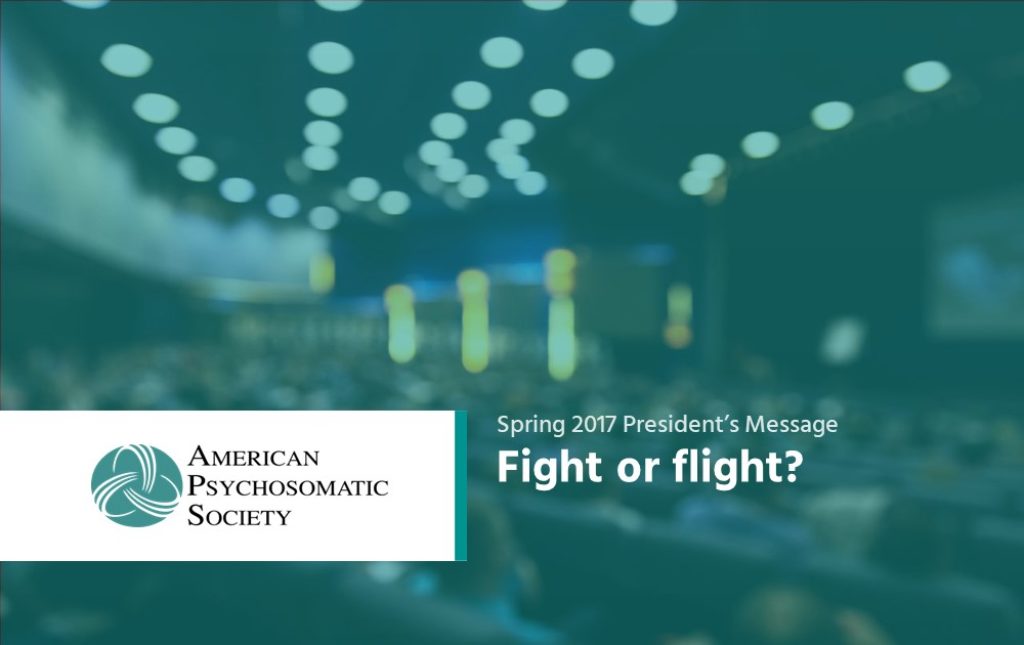 I can tell you exactly what I was doing late in the evening of November 8, 2016:  I was watching election returns and researching whether New Zealand was offering visas to university faculty. The potential threat to values that I and other members of this Society hold dear, such as social justice and affordable health care, seemed overwhelming. Yet, a few months later, when an international colleague asked me if I was thinking about leaving the U.S., I told her that I was resolved to fight the good fight instead.

In a New Yorker article about the economist Albert Hirschman (June 24, 2013), Malcolm Gladwell wrote, “Hirschman was interested in contrasting the two strategies that people have for dealing with badly performing organizations and institutions.  ‘Exit’ is voting with your feet, expressing your displeasure by taking your business elsewhere.  ‘Voice’ is staying put and speaking up, choosing to fight for reform from within . . . . Exit is passive. It is silent protest. And silent protest, for [Hirschman], is too easy.” APS has already faced one decision between exit and voice: where to hold our annual meeting.  After the initial travel ban imposed by the Trump administration, we made a quick poll of the membership to try to gauge the effect on meeting travel and the general opinions of our members.  Unsurprisingly, the membership who responded were in favor of APS making its voice heard for freedom of science (94%), affordable physical and mental health care (93%), and freedom of travel and immigration (88%).

But the question of where to hold the annual meeting was more difficult. The economic value of our meeting makes exit relatively more appealing – we have seen lately in the retail sphere what “voting with your wallet” can do! In terms of people who would have been personally affected by the travel ban, it was almost literally six of one (would not be able to attend a meeting in the U.S.) and half a dozen of the other (would not be able to attend a meeting outside the U.S.).  We also asked you about this option: “I support moving the 2018 APS Annual Meeting to a location in Canada if technically feasible without excessive cost to the Society.”  Most people (68%) were supportive of this option, a minority opposed it (16%), and another minority were undecided (16%). In the end, moving the meeting to Canada for 2018 was not possible at short notice without excessive cost, and so Council, after long discussion, voted to keep the 2018 North American location the same (Louisville, Kentucky) and to consider locations in Canada for 2019.  (Maybe in 2020 we’ll go to Mexico!)

Exit was not an option for 2018, but that doesn’t mean accepting the status quo – voice remains.  Some of you probably think of Kentucky as the home of Senator Mitch McConnell, about whom nothing more need be said, but Louisville is also the home of U.S. Representative John Yarmuth. In case you haven’t seen him on the Sunday talk shows in the U.S., Yarmuth is one of the most vocal defendants of the Affordable Care Act. He also cares about reducing gun violence, improving literacy, and instituting a more humane immigration policy. To read more about Yarmuth and his positions, see his webpage (https://yarmuth.house.gov/).  At our Council meeting in March, Pete Gianaros shared what he had learned about influencing politicians: that grassroots endeavors count for a lot more than official statements. Maybe the 2018 meeting offers us an opportunity to “stay put and speak up” by hearing from Yarmuth or one of his staffers about how to most effectively influence members of Congress and state houses; to devote some meeting space to a call room stocked with phone numbers of congressional representatives and scripts for advocating for issues related to mental and physical health and wellness; or to pick up an APS-branded postcard and drop a line to someone in government.

The 2017 meeting in Seville also saw the formation of a new advocacy group.  President-Elect Bruce Rollman joined with others for the first meeting of this group, which will be taking the lead on matters of voice for the Society.  We hope to have a discussion board for advocacy issues in place in the coming months.  If you want to become involved in advocacy or you have ideas about enhancing APS’s voice, please contact Bruce (and let him know).

By the time you read this, one of the biggest opportunity for scientific voice will have just passed:  The March for Science.  I hope that many of you will have made your voice heard in Washington, D.C., and around the U.S. and the world in support of scientific values and the role of science in public health and public policy.  If you have photos of yourself and/or other APS members marching for science, share them with us! I myself have my brain hat and my APS-branded March for Science poster ready and will be marching with other APS members in Chicago.

My final word for this column is one of thanks. The meeting in Seville was a great success, in large part due to the efforts of outgoing Program Chair Lorenzo Cohen and his committee.  Christoph Herrmann-Lingen finished his Presidential year by handing a society over to me that is in great shape and poised for growth.  Thanks, too, go to all of our outgoing officers and committee chairs, who were recognized in Seville. I am looking forward to this year, culminating in our Annual Meeting in Louisville. Keep an eye out for information about things to see and do in the beautiful Kentucky bluegrass region, which will appear in the newsletter and on Facebook over the year. It’s more than racehorses and bourbon (as if that wasn’t enough.) For example, although you’ll miss the Kentucky Derby, which is run on the first Saturday in May, you’ll catch the Humana Festival of New American Plays, a nationally recognized theater festival.

Wishing you all a happy and productive summer (or, as they call it in New Zealand, winter).