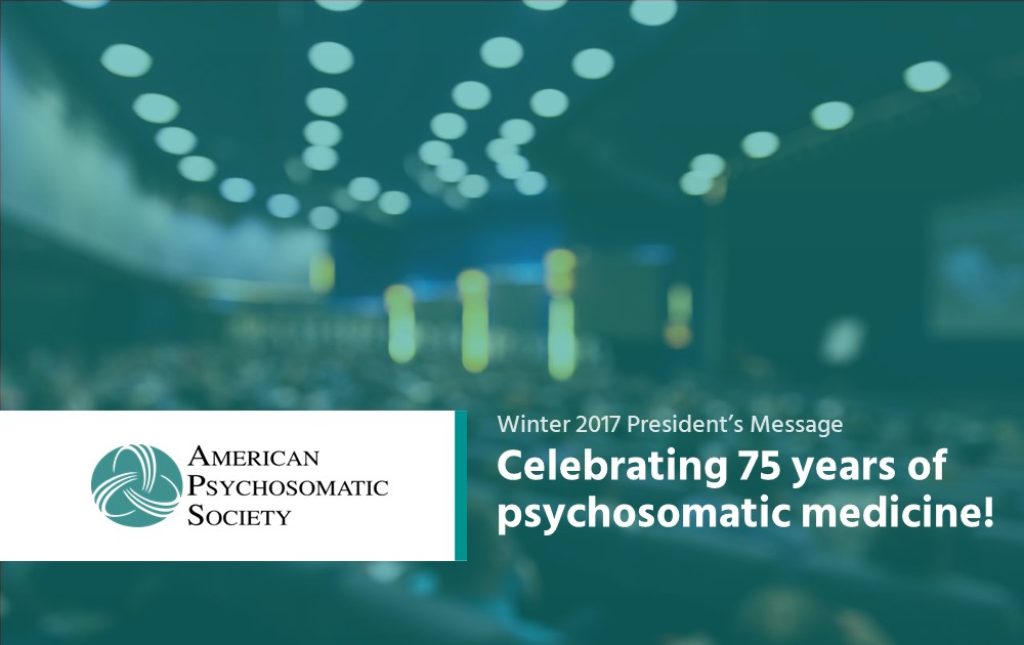 In 1942, now 75 years ago, Dr. Helen Flanders Dunbar, the founding (and so far only female!) Editor-in-Chief of Psychosomatic Medicine wrote in a letter to the readers of her Journal and other possibly interested colleagues:

“Dear Doctor,
Because of the increasing importance of psychosomatic medicine in relation to the present War Emergency it has been decided to organize a Society for Research in Psychosomatic Problems.

The first meeting will be held with the Society for Research in Nervous and Mental Diseases in New York on Friday, December 18th. The topic for discussion will be Fatigue.”

And indeed, one year after the Japanese attack on Pearl Harbor, two weeks after the first self-sustained nuclear chain reaction and despite war-related restrictions on travel, more than 300 attendees, rather than the expected 50, followed the invitation and participated in the totally overcrowded inaugural meeting of the Society which only a few years later was given its current name, the American Psychosomatic Society.

In the 75th year of this event we can proudly congratulate ourselves on our Society’s anniversary. It may be by coincidence that starting this very anniversary year, new codes have been added to the Medicare Physician Fee Schedule to allow payment to health care providers for integrating behavioral health services, but APS members were definitely among those who paved the way to this important achievement. Let’s take this as just one more reason for celebrating the jubilee with our members, trainees, colleagues and friends from around the world during the upcoming meetings of the Society. For further information on the various anniversary-related activities please see the more detailed announcement by Dr. Rebecca Reed in this Newsletter.

While APS was organized as an interdisciplinary scientific society from the beginning, the early years were dominated by mainly male MDs, most of them psychiatrists. It took another 30 years for Margaret T. Singer to become the first female (and the first PhD) President of the Society. The majority of MDs (including MD/PhDs) in the membership held until 2000, while in recent years APS has had a more diverse membership with MDs only making up around 30%. In early years much of APS’ attention was directed towards immediate problems of patient care, including single case studies and discussions of (often psychoanalytic) theoretical concepts of mind-body interactions and psychotherapeutic treatment.

Things have changed a lot and I would argue that most – although not all – of these changes have been for the better. Reasons for this change are multiple. One reason may be that some core aspects of psychosomatic medicine, eg, its focus on altered (psycho-)physiological function rather than morphological organ changes in disease states has become popular in many areas of medicine. Psychosomatic research questions now seem to be more readily accepted by major medical societies, their conferences and journals than they had been in the past. Nowadays, several medical practice guidelines explicitly address psychosomatic topics. This increased acceptance is closely related to decades of intensive research using refined methods and measurements in areas such as endocrinology, immunology, functional genomics/epigenetics, electrophysiology, and functional imaging methods (for both the brain and other organs).

These refinements have a lot to do with advanced technology, which is one of the key factors shaping APS’ current research and membership structure. It is therefore almost logical that the Program Committee for this year’s Annual Meeting put the Meeting under the Theme “Mobilizing Technology to Advance Biobehavioral Science and Health”. Since the future will inevitably bring even more exciting technological opportunities for in-depth assessment and innovative treatment you should not miss the opportunity to hear (and see) exciting cutting-edge presentations about technological solutions for biobehavioral research questions at the Meeting!

However, not every technological innovation necessarily produces scientific progress and I hope for lively discussions about not only the opportunities of new technologies but also their limitations and even risks.

Over the course of history, there is abundance of examples of enthusiastically praised but finally useless or even harmful new technologies in medicine. As a recent development, wearable devices are expected to motivate obese persons to exercise more and lose more weight. However, history also tells us that such assumptions, although quite plausible, need rigorous scientific enquiry before they can be accepted as proven, and their benefit may be limited to some subgroups of persons or specific indications. After some positive, mainly short-term trials, the recent IDEA trial in 471 overweight or obese young adults (Jakicic JM et al., JAMA. 2016;316:1161-71) found that adding an activity tracker and web-based feedback system to a standard behavioral weight loss intervention unexpectedly led to significantly smaller weight loss than the standard intervention alone. This does, of course, not mean that it was necessarily harmful to use the device but it nicely shows that not everything that sounds plausible actually works for everyone. In addition, when using new technologies, also possible harms need to be seriously considered. According to recent warnings from IT experts (eg, http://www.healthcareinfosecurity.com/interviews/wearable-devices-security-risks-i-2764), wearable devices may serve as entrance ports for hacker attacks and thereby carry risks to both patient data privacy and the IT infrastructure of health care (or research) organizations.

At a time in which attacks on IT infrastructure are becoming a major global threat, such concerns should not be easily disregarded. Those of you living in the US have just experienced the destructive political powers of foreign IT intruders and we in Germany with our relatively recent history of two totalitarian regimes would even feel worried about own future governments that might use such data for political repression. In this sense it will always be important for technology-based research to keep some inner distance to the rapid and sometimes overwhelming pace of technology development. We need to take the time and effort required for thoroughly studying not only the benefits of new technologies but also their risks – in just the same way that has long been standard for other types of medical procedures or drugs.

Last but not least, as already mentioned in my previous newsletter message, one more potential risk of relying too readily on technological solutions for human sufferings may lie in their adverse psychological effects on patients and the physician-patient relationship. Some of our patients no longer trust their own body signals while expecting relief of their anxieties from permanently observing and meticulously documenting values measured by ever-present devices. Manfred Spitzer, a German psychiatrist may be exaggerating but probably isn’t completely wrong when talking of “digital dementia” in the context of excessive digital media consumption leading to increased loss of contact to oneself and the surrounding “real” world. And although technology can be a used as a great facilitator of health care provider-patient communication it can also be misused to replace personal contact and interaction with patients which was so highly valued by APS’ founders – and still is by many of our members including myself.

In his 1973 Presidential Address, former APS President Albert Stunkard put this value set as follows: “Psychosomatic medicine began as a social movement within medicine, designed to counteract the mechanistic and impersonal features that had accompanied the introduction of science into medical education. … It sought to restore respect for the psychological, to humanize medicine in order to improve the care of patients.”

As a clinician I still find direct personal encounters with my patients not only indispensable but also the most rewarding element of practicing medicine. As a researcher having studied patients treated by advanced technologies (such as implanted defibrillators, which are definitely good things since they help certain patients live longer) I am convinced that, at least in medicine, more and better science and technology often requires more rather than less personal attention to individual patients (who might, for example, be frightened by getting an uncontrollable foreign object implanted or receiving electrical shocks from that device). Today the question cannot be to use or not to use technology. However the heritage of APS’ founders requires us to use technology in a considerate and balanced way. It should always be justified and embedded in a reasonable research concept and/or reliable health care provider-patient relationship.

I also like Dr. Stunkard’s idea of psychosomatic medicine and APS as a social (rather than exclusively scientific) endeavor. In fact, APS’ foundation was not only facilitated by the social catastrophe of war affecting the US but also by epidemiological needs of the US population and by the social and political catastrophe in Europe, which forced many of the brightest clinicians and scientists into emigration. Several of APS’ founders were recent immigrants from Europe and some of them had to emigrate because they had been political opponents of the Nazi ideology and regime. Another brilliant example of a politically active European immigrant to the US is the famous cardiologist Dr. Bernard Lown, recipient of the 1998 APS President’s award for his remarkable contributions to psychosomatic medicine – both clinical and scientific. Besides his scientific and clinical work, Dr. Lown spent his life fighting for a better health care system and advocating for responsible use of a high potential – high risk technology and was awarded the 1985 Nobel Peace Prize for co-founding the International Physicians for the Prevention of Nuclear War (IPPNW). Others have followed him. A recent example comes from Dr. George Lundberg, former editor of JAMA and discussant at the legendary Great Debate during the 2001 APS Meeting who cautions us to prevent “Sudden Unexpected Death on a Massive Scale” by nuclear war (see http://www.medscape.com/viewarticle/870698). And just the morning of the day I am writing this message I come across another example on the news: A group of 37 top US scientists just sent a message to [then-] President-Elect Donald Trump to abide by the Iran nuclear agreement. These examples may show that science and societal engagement are by no means in conflict but their combination may sometimes be essential.

APS was founded in response to a national and global political emergency. There may be new emergencies threatening us in the future, and APS is still needed at least as urgently as it was in 1942.

So we have good reasons for celebrating our anniversary and you are all cordially invited to attend the anniversary events we are preparing. In these days we have more than good reason to keep our science and our collegiality alive. And I am sure both will benefit a lot from celebrating together at the upcoming meetings. It may help that this year’s Annual Meeting will take place in a spectacular and historically unique part of the world. If you come to Sevilla, I will tell more about that. Enjoying its beauty may not only help our science and community flourish but its historic appeal may also stimulate us to become more engaged as an organization than we have been in the past years in helping to shape not only science and medicine but also other aspects of the world surrounding us.