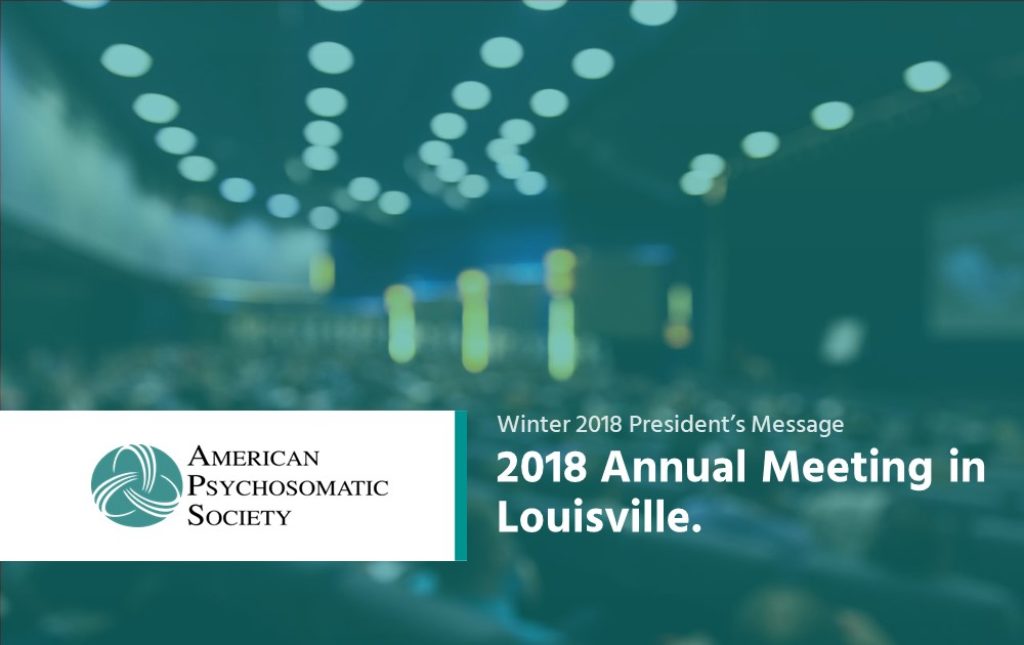 This is my last Presidential column for APS, and so I begin by thanking you for the honor of serving as your President. It has been a rewarding and, I hope, productive year. The members of APS’s Council and Committees have done such good work and, as always, Degnon Associates provided essential support and institutional memory. One of our major initiatives this year was revising our Diversity and MD Travel Awards to enrich those experiences, and Ollie Cameron, David Krantz, Julian Thayer, and Harald Gündel pitched in to help. Thank you all.

The recent anniversary of the Women’s March has this 10th female President of APS thinking about #metoo in the scientific community. You don’t need to look far to find cases of harassment in an academic setting. For example, I personally know:

The Annual Meeting is our most important Society event. As much as we would all like to believe that sexual harassment doesn’t occur there, it seems unlikely given the overall prevalence. A survey of members of the American Political Science Association found that 42% of women (and 22% of men) had been put down or condescended to at their meeting; 30% of women (and 10%) of men had been verbally sexually harassed; and 11% of women (and 3% of men) had been physically sexually harassed. Threats of professional retaliation or bribes of professional rewards sometimes accompanied physical harassment. Junior faculty were the group most likely to be harassed.

There are many reasons to care about harassment – let me just enumerate a few. First, as Joan Williams and Kate Massinger from UC Berkeley’s Hastings College of Law wrote, “One reason the [STEM] pipeline leaks is that women are harassed out of science.”Harassment is demeaning if not dangerous and has the potential to drive women out of academia and scientific careers. A thriving science depends on nurturing our best talent regardless of the kind of body it is housed in. Second, it is illegal. US Title IX dictates that any activity receiving federal financial assistance (including the APS Annual Meeting) should protect participants from discrimination, sexual harassment, and sexual violence.Third, and this we should all know too well, inequality is unhealthy. To the degree that APS’s goal is improvement of the public health, words and actions that reinforce inequality – whether based on gender, race, ethnicity, seniority, or something else – are contrary to our ethos.

Why, then, does harassment occur? And why does it happen so often at conferences? As the examples above illustrate, there are several factors at play. Often, harassment is the consequence of synergy between a person prone to harassment and a permissive situation. First, harassment often occurs in the context of a power imbalance. Academia, with its rigid hierarchy, has abundant dominance and power cues. Men who are prone to harassment have strong cognitive links between social dominance or power and sexuality.Social power also decreases inhibitory processes, yielding greater likelihood of acting on inappropriate impulses.Second, there is the situation. At a hotel, a harasser can follow you to your room, with all that that action implies. Alcohol can be part and parcel of the social aspect of a conference, but like power, it can also disinhibit.5 Unlike the university setting, conferences often do not have an administrative structure for reporting or pursuing complaints.

In the face of these facilitating circumstances, how can we prevent harassment? The evidence suggests that anti-harassment social norms and cues and strong positions by leadership suppress it.4 Social norms and cues might even make disinhibited people act better.5 Hence, our new code of conduct for APS events, which will be posted on the website, included in the meeting app, and distributed to attendees before the meeting.I suspect that the “what” of that code will be familiar to many if not all of you, but I encourage you to read it. I hope that the “how” of the code will ensure that the Annual Meeting is a place where all participants, at all levels of seniority, can focus on psychosomatic science without worrying about harassment. That hope can be realized if we all commit to a harassment-free environment. If you see something, say something. If you hear language that could be construed as harassment, it may be enough to intervene with, “That’s not an appropriate thing to say.” The speaker may not have intended to harass, and an apology could set things right. If you experience harassment and are not comfortable saying something directly, please let someone else know. The code of conduct will include channels for informing APS, and you can communicate anonymously if you wish. Take inspiration from “The Notorious RBG”, who was harassed herself as a law student:

It’s about time. For so long women were silent, thinking there was nothing you could do about it, but now the law is on the side of women or men who encounter harassment.

APS is on their side as well. I look forward to seeing you all at the Annual Meeting in Louisville for an inspirational and collegial event.

Special thanks to Council member Kristen Salomon for her work on the new APS harassment policy.