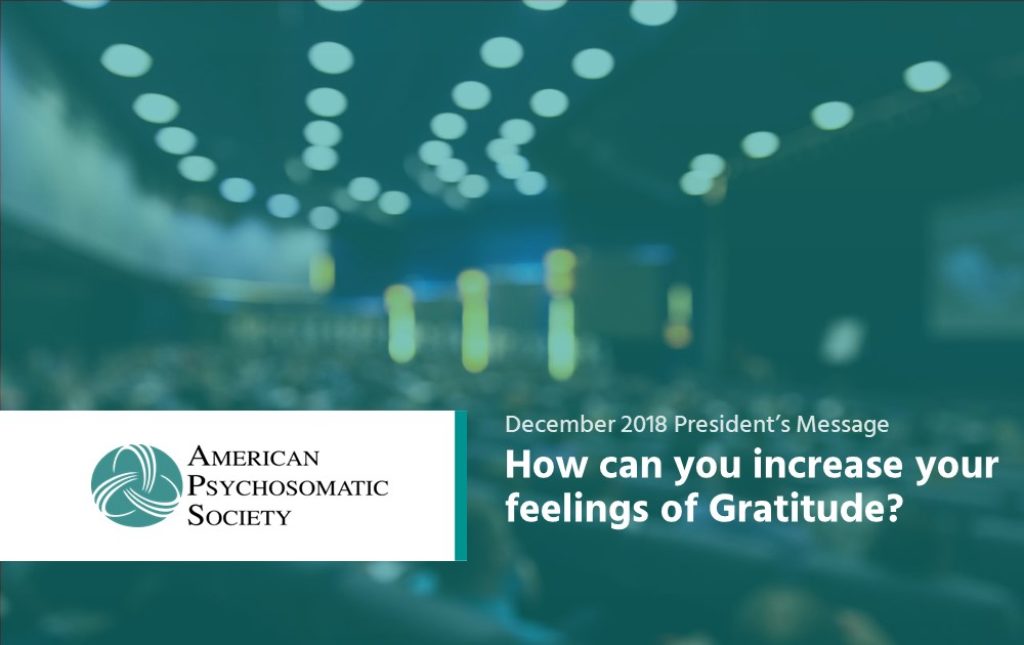 Gratitude, derived from the Latin word gratia, which means grace, graciousness, or gratefulness, is a disposition towards appreciating and being deeply thankful for the people, events, and experiences in one’s life.

APS members who regularly attend our Annual Meeting and read our journal are likely familiar with some of the research studies that link gratitude to improved life satisfaction and sleep quality, and reductions in pain, mood symptoms, and inflammatory biomarkers.  Moreover, emerging trial-derived evidence, including some generated by APS past presidents, have demonstrated that relatively simple interventions such as writing gratitude letters or keeping a gratitude journal can increase these feelings, improve adherence with healthy behaviors, and subsequently generate improved health outcomes.

For many, December is a month to reflect upon the past year and create ambitious new plans for the following year.  But what if our resolutions simply included trying to increase our feelings of gratitude, and how would we start?

To begin, consider these ideas adapted from two articles, one by and the other about UC Davis Professor Robert A. Emmons’s research on the science of gratitude:

As I finish this month’s Message, I read about former U.S. President George H.W. Bush’s death at age 94 in this morning’s papers and was immediately reminded of his habit of writing many thank you notes and letters of gratitude.  Indeed, President Bush (41) maintained his practice of writing thank you notes for two hours out of most evenings even after he became President including his final note to his successor, Bill Clinton.

Lastly, I am delighted to report to you that as of October 31, we received 597 abstract submissions to our 2019 Annual Meeting.  This is nearly a 40% increase in submissions over each of our last two Annual Meetings, and is the second highest number of abstracts submitted over the past 10 years.  Only San Francisco 2014 was higher at 635, and I think Vancouver 2019 has an excellent chance of breaking that record after our call for Late Breaking Abstracts ends December 3!

I am grateful to Sarah Pressman and to the rest of our Program Committee and to Laura Degnon, Sarah Shiffert, and the team at Degnon Associates for all of their time and tireless efforts to create a fabulous experience for Vancouver 2019. We hope you will join us!

Wishing you and your loved ones a happy and healthy Holiday Season!

PS: Thank you also for the expressions of concern many of you sent to me following my November column, A Message From Pittsburgh.  While my Pittsburgh community is slowly recovering, unfortunately the plague of gun violence and mass shootings have continued on a near daily basis.  Nevertheless, I believe public opinion in favor of common sense gun control will grow with more physicians speaking out and several gun control activists entering Congress as new members next month.  Still, as this 1995 anecdote about George H.W. Bush reminds us, the struggle to change legislation is a long process.